Posted by: AlpOcal 04/02/2015 in Technology Comments Off on Mobile ad spending to hit $100B in 2016 and become the biggest digital ad market


Mobile ad spending is on a tear. It will top $100 billion in 2016 and account for more than 50 percent of all digital ads for the first time, according to market researcher eMarketer.

More than $101.37 billion will be spent on ads served in 2016 to mobile phones and tablets worldwide. That’s a 400% increase from 2013. From 2016 to 2019, mobile ads will nearly double again, rising to $195.55 billion. That figure will account for 70.1 percent of all digital advertising as well as more than one-quarter of total media ad spending worldwide.

It’s all about the number of consumers adopting mobile devices. As that number soars, marketers are chasing consumers into mobile markets. Next year, eMarketer estimates, there will be more than 2 billion smartphone users worldwide, more than one-quarter of whom will be in China alone.

The number of tablet users worldwide is growing more slowly than the global smartphone audience. But tablets will reach more than 1 billion users in 2015. eMarketer said that in many emerging and developing markets, consumers are often accessing the internet mobile-first and mobile-only, driving marketers to mobile advertising.

The U.S. and China will drive mobile ads in the short term. In 2016, U.S. advertisers are expected to spend $40.2 billion on mobile ads, more than doubling the total from 2014. In China, advertisers will spend $22.1 billion next year, triple the amount spent in 2014. In both countries, mobile will become the majority of all digital advertising next year.

Next year, Canada and Australia will both surpass South Korea to become sixth- and seventh-largest mobile ad markets, respectively.

By 2018, several of the top growth markets will have made significant gains. That year, Brazil will jump three spots from 2015 to become the ninth-largest mobile ad market globally, and Indonesia will make the largest gain, rising from No. 21 this year to No. 12 in 2018. However, despite India’s massive mobile user base, the market will continue to lag in mobile ad spending, failing to eclipse $1 billion before 2018.

Here’s a chart on mobile internet ad spending by country. 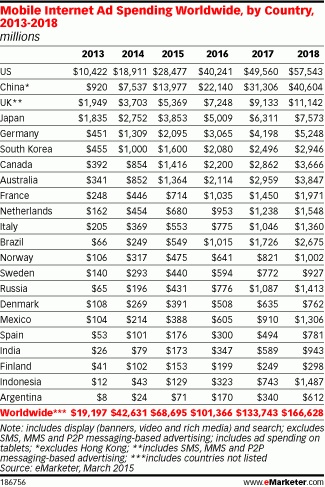 Image Credit: eMarketer
Share this Story
Previous: Which Emerging Digital Tools and Services Are Consumers Most Interested In?
Next: On demand usage universal among the young

The 25 Best Producers Of Barolo

How much should a SaaS company invest in professional services?